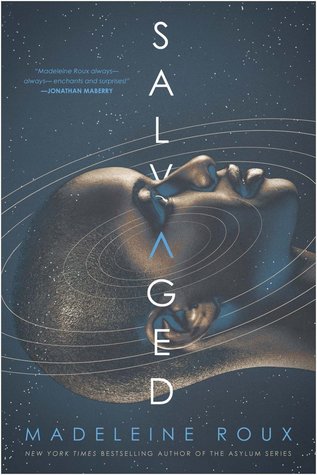 Rosalyn Devar is on the run from her famous family, the bioengineering job she’s come to hate, and her messed-up life. She’s run all the way to outer space, where she’s taken a position as a “space janitor,” cleaning up ill-fated research expeditions. But no matter how far she goes, Rosalyn can’t escape herself. After too many mistakes on the job, she’s given one last chance: take care of salvaging the Brigantine, a research vessel that has gone dark, with all crew aboard thought dead.

But the Brigantine’s crew are very much alive–if not entirely human. Now Rosalyn is trapped on board, alone with a crew infected by a mysterious parasitic alien. The captain, Edison Aries, seems to still maintain some control over himself and the crew, but he won’t be able to keep fighting much longer. Rosalyn and Edison must find a way to stop the parasite’s onslaught…or it may take over the entire human race.

I’m not going to lie, when I first started the book, I had my doubts that I was going to like this one, much less make it to the end of it before giving up. As someone who mostly cares about characters and sees plot as secondary, I had a hard time with this one at the very beginning. I just didn’t like Rosalyn at first (even though I could guess why she fled from her family and why she became an alcoholic) and to get to know other characters through her. Their descriptions through her eyes and then getting to know them directly through interactions with her didn’t align for me.

What kept me going was the plot though, which was addictive pretty much right from the getgo and my problems with the main character quickly became a thing of the past.

I thoroughly enjoyed how gory it was sometimes and especially the mind manipulating alien parasite. That’s when it really got interesting for me, because it wasn’t just a thrilling plot, but it also became very character driven as their past became a huge part of their fight against this parasite. It helped that we get to experience it all not just through Rosalyn but also through characters whose mind was manipulated by the parasite.

And while I could guess who was behind it all (as was intended, I’m guessing, due to the clues), I was still glued to the pages, wanting to find out how it could possibly end well. I know many think a predictable story can ruin a book, but I care much more about characters. Those are the ones that need to keep me glued to the pages and not some big mystery that I just want to see revealed. Roux had the perfect mix of both going for me. I liked and cared about characters (after my initial struggles) AND the way to the big reveal was thrilling and had me at the edge of my seat.

Roux sure knows how to write an engaging story that never slows down while also making time to explorer every character’s own story. Bumpy start aside, SALVAGED is a deliciously dark read, perfect for the month of Halloween and if I hadn’t been a responsible adult in between, I probably would have read it one sitting/day.