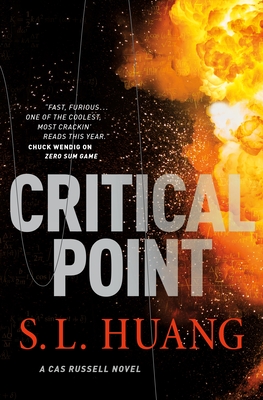 Math-genius mercenary Cas Russell has stopped a shadow organization from brainwashing the world and discovered her past was deliberately erased and her superhuman abilities deliberately created.

And that’s just the start: when a demolitions expert targets Cas and her friends, and the hidden conspiracy behind Cas’s past starts to reappear, the past, present, and future collide in a race to save one of her dearest friends.

Cas Russell quickly became a favorite character of mine back when I first read the start of the series, and she’s only became more awesome as the series goes on. I love every single book in this series, but Critical Point is by far my favorite out of the three now. It’s an explosive read in every sense of the word and I hope we get to read many more awesome stories about Cas.

Critical Point doesn’t pull any punches and immediately starts off with a strong first chapter, jumping right into the action and sucking you right back into the messy, action-packed world of math-genius Cas.

While S.L. Huang sure knows how to keep us at the edge of our seat and has the level of thrill cranked all the way up from start to finish, blessing us with the most amazing fight and stunt scenes, the characters and their relationships aren’t lacking either. My favorite part of Critical Point was actually how the whole book is very much about Cas‘ relationships, and how she opens up to others. Damn did that make me feel all the things.

Critical Point is all about explosions and more than once was I truly worried about the characters, especially as I started caring even more about them after so many more background stories were revealed. This story is deeply personal for Cas which made this all the more intense. Feels galore for sure and easily my new favorite. I really hope we get to look forward to a lot more books in the future.