Cover Reveal: Hold Fast Through the Fire by K.B. Wagers

I am BEYOND excited, like you-can-hear-me-from-space-screaming exited, to share the cover of K.B. Wagers‘ upcoming Hold Fast Through the Fire, one of my most anticipated books of 2021! I tell you, you are not ready for this kick-ass cover!

Hold Fast Through the Fire is the sequel to A Pale Light in the Black and second book in the the NeoG series. It will release next summer (July 27, 2021) from Harper Voyager.

The Near-Earth Orbital Guard (Neo-G)—inspired by the real-life mission of the Coast Guard—patrols and protects the solar system. Now the crew of Zuma’s Ghost must contend with personnel changes and a powerful cabal hellbent on dominating the trade lanes in this fast-paced, action-packed follow-up to A Pale Light in the Black.

Zuma’s Ghost has won the Boarding Games for the second straight year. The crew—led by the unparalleled ability of Jenks in the cage, the brilliant pairing of Ma and Max in the pilot seats, the technical savvy of Sapphi, and the sword skills of Tamago and Rosa—has all come together to form an unstoppable team. Until it all comes apart.

Their commander and Master Chief are both retiring. Which means Jenks is getting promoted, a new commander is joining them, and a fresh-faced spacer is arriving to shake up their perfect dynamics. And while not being able to threepeat is on their minds, the more important thing is how they’re going to fulfill their mission in the black.

After a plea deal transforms a twenty-year ore-mining sentence into NeoG service, Spacer Chae Ho-ki earns a spot on the team. But there’s more to Chae that the crew doesn’t know, and they must hide a secret that could endanger everyone they love—as well as their new teammates—if it got out. At the same time, a seemingly untouchable coalition is attempting to take over trade with the Trappist colonies and start a war with the NeoG. When the crew of Zuma’s Ghost gets involved, they end up as targets of this ruthless enemy.

Now, before we get to the most stunning, super awesome and just overall perfect cover, here are three things K.B. Wagers loves about Hold Fast Through the Fire:

Now buckle up and have a look at the incredible book cover! 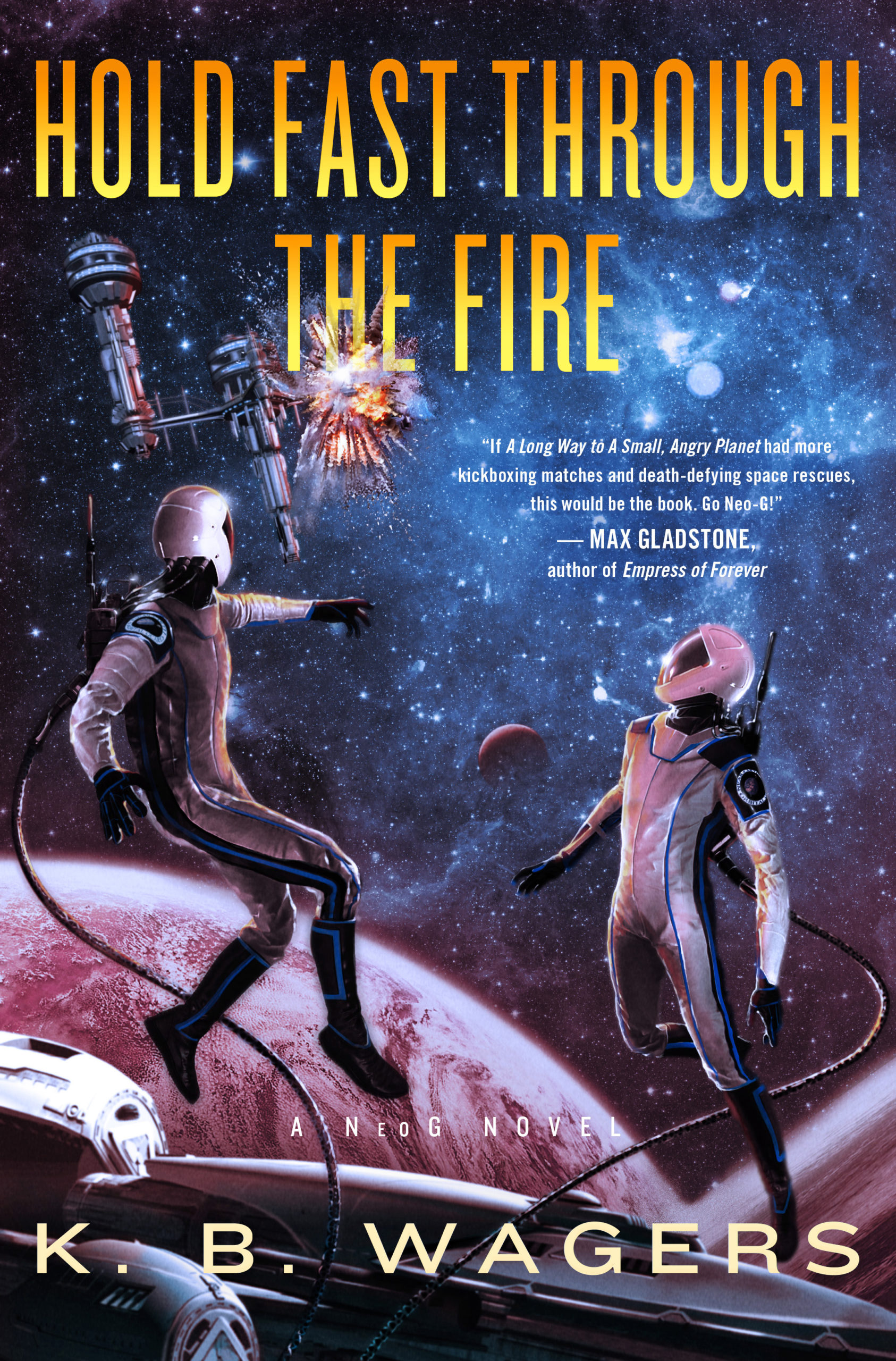 K.B. Wagers is the author of the Indranan War trilogy (the first of which, Behind the Throne, has been optioned for film and television by legendary UK film producer David Barron) and the Farian War trilogy from Orbit Books. As well as the NeoG Adventures with Harper Voyager. They are represented by Andrew Zack of The Zack Company.

Having grown up on a farm in northeastern Colorado, K.B. graduated from the University of Colorado with a bachelor’s degree in Russian Studies. They now live in the shadow of Pikes Peak with their partner, along with a crew of poorly behaved cats. They are especially proud of their second-degree black belt in Shaolin Kung Fu and three Tough Mudder completions, even if they can’t run like that anymore. There’s never really a moment when they’re not writing, bullet journalling, or hand-lettering, but they do enjoy photography and a good whiskey.

3 replies to “Cover Reveal: Hold Fast Through the Fire by K.B. Wagers”