Review:
The Unbroken by C.L. Clark 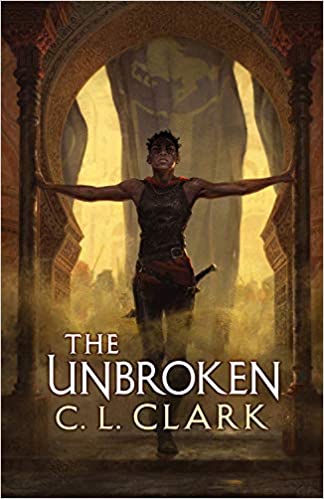 Touraine is a soldier. Stolen as a child and raised to kill and die for the empire, her only loyalty is to her fellow conscripts. But now, her company has been sent back to her homeland to stop a rebellion, and the ties of blood may be stronger than she thought.

Luca needs a turncoat. Someone desperate enough to tiptoe the bayonet’s edge between treason and orders. Someone who can sway the rebels toward peace, while Luca focuses on what really matters: getting her uncle off her throne.

Through assassinations and massacres, in bedrooms and war rooms, Touraine and Luca will haggle over the price of a nation. But some things aren’t for sale.

I want to start off with making it clear that I enjoyed The Unbroken quite a lot, don’t get me wrong there. It’s a fantastic debut and I’m looking forward to its sequel.
I also had some issues with the book though, issues regarding race and power dynamics, that I, as a white person, feel somewhat hesitant to go into detail with. I feel like it’s not my place to criticize those specific aspects of the book, especially this being a book by a black author and my opinion that an author should get to have to explorer such (personal) topics in their own way. I also don’t want to not mention them though, because I think it’s an important aspect of the book.
So wether you go on reading my review or not, I highly recommend you also read reviews by black readers.

I had already read Clark’s short story, You Perfect Broken Thing, last year which I liked a lot and which had me even more excited about Clark’s debut novel, The Unbroken. Already having quite high expectations, I was happy to pretty much fall in love with this book on page one just for featuring an m/f friendship. Those platonic m/f relationships are still so rare in books, I was happy to know this book features one as well. And it’s not just that one relationship that makes this book special, but really how many very different relationships The Unbroken goes into depths with, all very complex, complicated, messy and one more interesting than the other. From friendships, over mother-daughter relationships, siblings and more, to love interests, there is a nice balance and no too hard focus on just a romantic relationship. As someone who cares about characters the most, I enjoyed reading about all these a lot.

Speaking of characters and relationships…
I absolutely LOVED Touraine and not just for her muscled arms lol. Touraine not only kicks ass, literally, but is a very complex character that I loved right from the start. She’s also a character whose journey is sometimes hard to watch, other times even downright frustrating to read about as an outsider. Touraine, snatched away from her home as a child, is very much the product of her upbringing as a soldier and a tool, and completely detached from her own culture. It’s painful to read how Touraine keeps siding with the people that are basically her slavers, while dismissing her own. There were definitely a few times when I wanted to hit her over the head for her actions. It’s all the more beautiful to see how she comes to realize this herself and changes though.

On the other hand you have Luca which I’m sad to say I didn’t like much. I felt like every single action she took, every decision she made was always based on what will get her on the throne which in turn just made her just as bad as everyone else, made her part of the oppressors  even though she claims to be better. As I mentioned at the start of my review, I feel like I’m the wrong person to criticize this, but having this POV of the oppressor and in a way as if I should sympathize with her, yet having her actions just do more damage, it was just somewhat off-putting.

And this is where my main problem lies. The relationship between the two. Not only did I not feel any chemistry between the two, but I also felt the wrongness of their relationship, that fucked up power dynamic, that Luca has Touraine’s life in her hands, wasn’t pronounced enough. There were certainly enough side characters trying to reason with Touraine but I felt like it never really hit home. While this is only the first book and Touraine still on a long journey of coming back to her culture and people,  I felt it should have been made more clear how wrong and problematic a relationship between the two is.

Where the book begins to shine though, is its world building. I just loved how we are slowly introduced to its magic and the story behind it all. Of course there is also the cultural aspect, the inspiration in the colonization of North Africa and I enjoyed the way Clark introduced us into the fictional version of it. Touraine being so completely dissociates from her own culture and its history is not only a great way for the reader to learn all about it with her, but also to show the deeply routed damage left by colonization.

Being the book that it is, it obviously features characters of color, mainly black ones, but it is a lot more inclusive than that. Not only does it feature queer (main) characters, but it is also a queernorm world. On top of that, it also has great disability rep and even with the possibility of magic present, doesn’t try to magically make that disability go away. (while both main characters are cis women, trans/non-binary characters are part of this world as well, and I’m hella excited to see a lot more of one specific nb character in the sequel)

As for the plot: this book doesn’t hold back on throwing punches, both figuratively and literally. This being a military fantasy at its core, you can and should expect some action. The Unbroken is full of anger, blood and death, never holding back, and certainly never getting boring. A fast-paced story of a city where a rebellion brews, you’ll go through this faster than you think.

While there were aspects of the story I did not enjoy and feelings I missed regarding some characters, The Unbroken is still one hell of a debut, and I can’t wait to read its sequel, which will hopefully dive deeper into its magic system and show us some more of side characters that I really liked that came somewhat short in the first book.