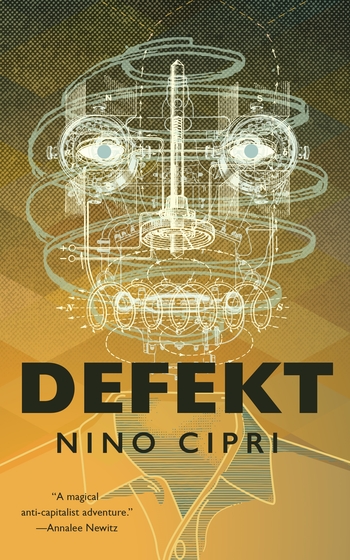 Derek is LitenVärld’s most loyal employee. He lives and breathes the job, from the moment he wakes up in a converted shipping container at the edge of the parking lot to the second he clocks out of work 18 hours later. But after taking his first ever sick day, his manager calls that loyalty into question. An excellent employee like Derek, an employee made to work at LitenVärld, shouldn’t need time off.

To test his commitment to the job, Derek is assigned to a special inventory shift, hunting through the store to find defective products. Toy chests with pincers and eye stalks, ambulatory sleeper sofas, killer mutant toilets, that kind of thing. Helping him is the inventory team — four strangers who look and sound almost exactly like him. Are five Dereks better than one?

Defekt is the companion novel to Finna, which I absolutely adored, so I was more than happy to read another story centering this weird and twisty furniture store. While Finna quickly leaves the store behind, entering parallel worlds, Defekt is firmly set at the store and I was excited to discover other absurdities this furniture store has to show us.

When I first met the character Derek in Finna, where we only get a very brief glimpse of him, I can’t say I thought I was ever going to like this character. The more curious I was about reading his very own story though, wondering if that could change. Turns out there is a lot more to Derek than one first thinks, like… a lot a lot.

Finna and Defekt are both very different yet also very much the same. At their core, both stories are about self discovery and self-reflection. Derek’s story was just extra special in that way and very much hitting the spot. I just loved how he learns his own potential, that he sees who he can be if he wants to, that there is a lot more in life for him. Through his clones who are all very different people, very different personalities and also genders, he gets a chance to really explorer his true inner self.

“Darkness was Derek turned inside out, all the alienation he kept firmly tamped down and contained within himself pulled out and plastered across their skin.”

I already loved the concept of this setting in Finna, the idea of an IKEA-like store with its labyrinthine hallways, its sometimes absurd products, with added wormholes for customers to get lost in. Not only does the setting make an excellent basis for an exciting story, but the added, not so subtle criticism of all things capitalism only makes it that much better.
While Finna was already a favorite, Defekt turned up with an added cuteness bonus. Yes, you read that right. Be ready to find out what exactly is cute about being stuck in such store were very weird furniture items turn to life, out to get ya.

“It’s easier, isn’t it. To confront the things that scare you when it’s, you know, not you.”

Based on Derek’s first appearance in Finna I really didn’t expect to love him/this story so very much, but I’m glad it was the case. Protect at all costs is all I’m saying. Derek is the most precious and I’m glad we got to read his story too.
I was also very happy to see Defekt being directly linked to Finna not just through the setting but with a character appearance (especially as it was a favorite one) as well as subtle hints at Finna’s main plot. ( you *could* read this story as a standalone but I still very much recommend reading Finna first)

Defekt was a big hit for me, not just because Derek is the most precious and relatable character ever but especially because of its unique way of character growth and self-reflection/discovery.