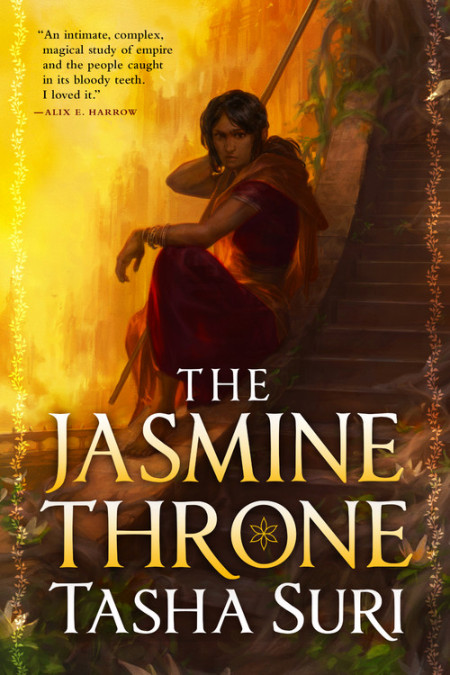 Imprisoned by her dictator brother, Malini spends her days in isolation in the Hirana: an ancient temple that was once the source of the powerful, magical deathless waters — but is now little more than a decaying ruin.

Priya is a maidservant, one among several who make the treacherous journey to the top of the Hirana every night to clean Malini’s chambers. She is happy to be an anonymous drudge, so long as it keeps anyone from guessing the dangerous secret she hides.

But when Malini accidentally bears witness to Priya’s true nature, their destinies become irrevocably tangled. One is a vengeful princess seeking to depose her brother from his throne. The other is a priestess seeking to find her family. Together, they will change the fate of an empire.

Sometimes I start reading a book, and I don’t know what it is exactly, maybe the characters, maybe the setting, maybe the writing itself or a mix of all these, but I’m just immediately transfixed and unable to stop reading without being able to tell yet what exactly it is that has me glued to the pages. The Jasmine Throne was like that for me. I pretty much loved it from the very first page.

If done right, I absolute love multi-POV stories, when there is more than just one or two, but a larger group of them. Tasha Suri didn’t just do it right, with a lot of different voices that are distinct, easy to tell apart, but also made this one hell of a read and experience because you have all these different characters with different intentions and goals, and reading from their POV makes you root for pretty much every single one of them, even though some work against others, even though some have opposing goals or completely different plans.

Characters are really important for me and make or break a story. When having a lot of POV characters, it’s often the case that I have at least a few favorites and always want to get back to their parts of the story, caring less about the others. While I quickly, almost love-at-first-page like, had my favorites in The Jasmine Throne, I really enjoyed every single other POV as well, because every single one had an interesting part to tell. Whether I liked the actual person and actions of characters might be a different story, but they were all really well done/written so that I enjoyed their POV even if I weren’t rooting for them.

My favorite aspect of the book was by far the magic system. Not only was the concept of the rot both beautiful and horrible at the same time but I found the overall aspect of nature-based magic, and how it was all set up very unique and fascinating. Additionally, the trope of a seemingly “nobody” gaining some real awesome powers without wanting (to use) them is one of my favorites and I’m more than happy that it hit one of my favorite characters.

The Jasmine Throne is an overall amazing book and there was really only one small thing that didn’t quite work for me: I didn’t feel the chemistry between two certain characters (you probably know who). But hey, I’m never that big on romance in books, that’s not really what I’m here for, so while I thought the romance felt a bit rushed and lacking in making me FEEL things, it didn’t really put a damper on my overall enjoyment of the book.

The Jasmine Throne is an epic start to a new series and I’m very much looking forward to what comes next. Considering the things that happened, the facts that were revealed, I’m sure the sequel will be one hell of a story too.